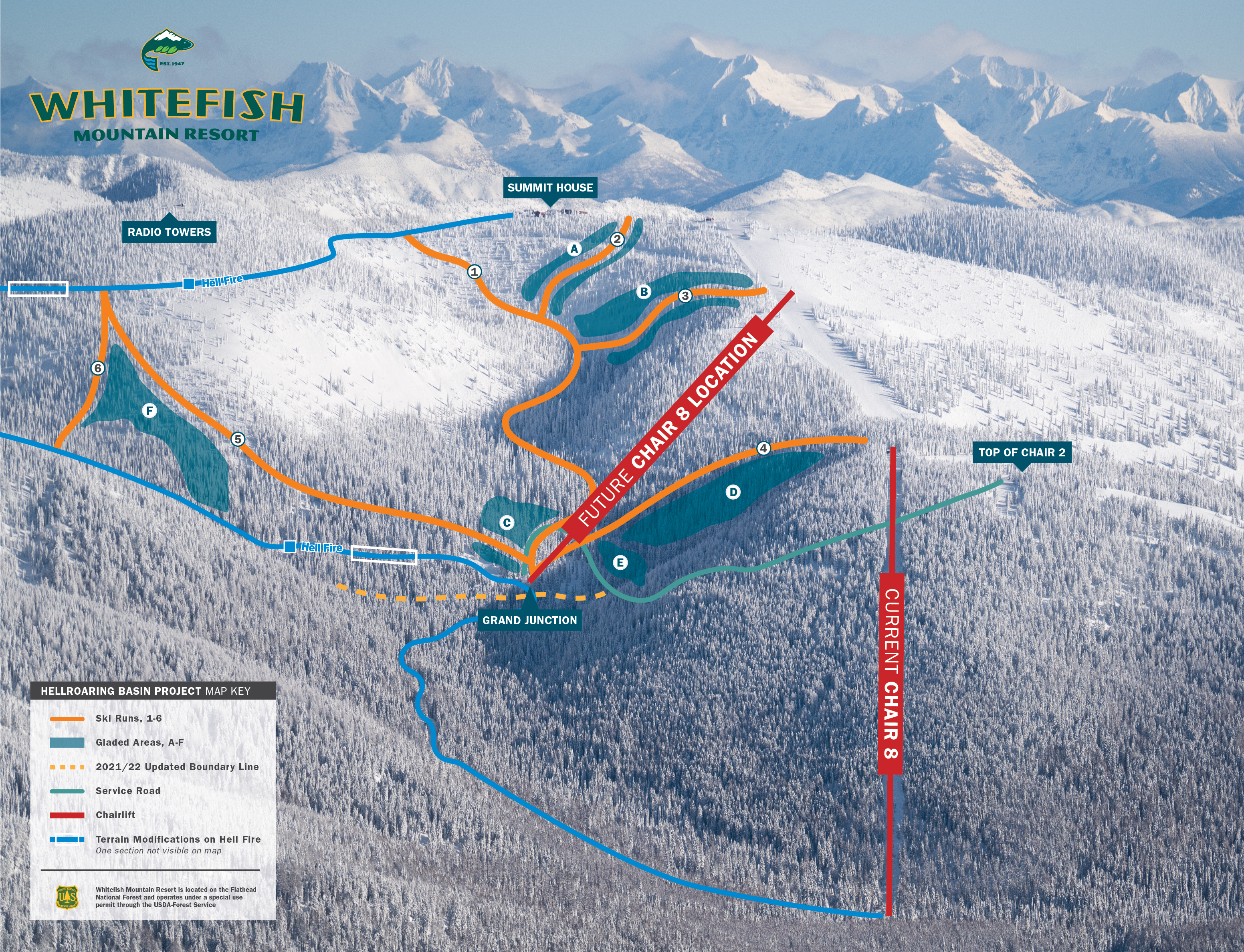 One of the cool things about living in a ski community is knowing your home mountain very well. Insider knowledge has many advantages, and if nothing else, it’s fun to know and share with others what’s newsworthy. This community is genuinely interested in more than just what’s happening, you like to know how it works. We thought you would appreciate a behind the scenes look at what goes in to a major project like what’s currently being planned for Hellroaring Basin.

Most of you know Chester “Chet” Powell. He retired last year however, he’s still working for us in a part-time role as the Director of Special Projects to help see us through our next big project improving Hellroaring Basin.

Chet started working up here in 1976 as a ski patroller, and eventually made his way up to Director of Operations. He’s helped to plan and direct many of the major improvements we’ve made here including adding terrain on the north side and Hellroaring Basin, as well as installing and replacing most of our chairlifts, and moving Chair 5. He also was there when we moved Chair 8/Hellroaring from the north side (where Chair 7 is now) to its present location in Hellroaring Basin.

Recently I sat down with Chet to ask him a few questions about what goes into planning big projects.

RP: Before we submit a plan to the U.S. Forest Service, we need to come up with a plan. What goes into that? Why did we decide to go to Hellroaring Basin in the first place (1996)?

CP: It was included in our permit area, and called the West Bowl. The original Hellroaring Basin plans were different from what we ended up with. There was actually discussion to install the chairlift’s bottom terminal at Grand Junction. It ended up where it is now because the plan also included creating additional runs that never happened.

RP: When did the planning begin for this current project? Why did we decide to do this?

CP: It’s been talked about for years at the mountain, and then we started to seriously talk about it and plan seven or eight years ago. Plans were finally submitted to the Flathead National Forest two years ago.

As for why, first, it’s a vast area with direct access from the summit, yet there’s only one groomable run (Hell Fire). We wanted to open the area up more, create runs that can be groomed, and make the area more enjoyable. Also, we wanted to have the lift take guests to a point where they could get back into the basin. Presently, guests must ski down to the front of the mountain and ride up Chair 1. By moving further up the mountain, guests will be able to ski back into the basin directly, and access more terrain on the front. Finally, and most importantly, moving the bottom terminal to Grand Junction will allow us to be able to open Hellroaring Basin earlier in the season.

RP: How do you figure out where to put runs?

CP: We look at fall lines, drainages, ridgelines and consider the slope grade. In Hellroaring Basin the terrain is steep, so we looked for places that could be groomable. We also look at where it makes the most sense to safely merge a run into another run.

RP: How do you figure out how to name runs?

CP: Naming runs often starts with a theme. When we opened up the north side, we chose the theme of “wildlife” and it was fun coming up with those. We also have a number of tributes—Moe Mentum, Schmidt’s Chute, Evan’s Heaven, Lee’s way, Sandi’s, Cal’s Country, Connie’s Coulee to name a few. Some are named for what they used to be like Big Ravine because that’s what it was.

RP: According to the plan, Chair 8 will move (again), what goes into moving a lift?

CP: Once the top and bottom locations are determined there will be a survey to determine the profile for the line. After that engineering begins—in an engineer’s office. They figure out where towers go, what length they need to be, from there we will figure out what we have on Chair 8—what we can use and what we will need. The chair will be uninstalled from the mountain. We will do what we can on the ground with trucks and cranes, and then use a helicopter for the rest. Once the lift is out we will store it in the Fir Lot where we will make the necessary adjustments. Meanwhile the terminals get moved to their new locations, and tower locations need to be excavated and poured with concrete. Once those are set, towers and lift assemblies are placed by helicopter. Once towers are in, the cable will be spliced, chairs hung, load testing, and finally inspection.

RP: What else do you think our community would like to know about the process?

CP: Big projects like this are a collaborative effort with the U.S. Forest Service. We come up with the design, and their specialists (hydrologists, wildlife biologists, soil experts, foresters, archaeologists) help guide us through the process. We are partners in using best management practices in our forest.

Speaking of the Forest Service, their analysis of the Hellroaring Basin Improvements Project will soon be complete. Look for an update very soon.