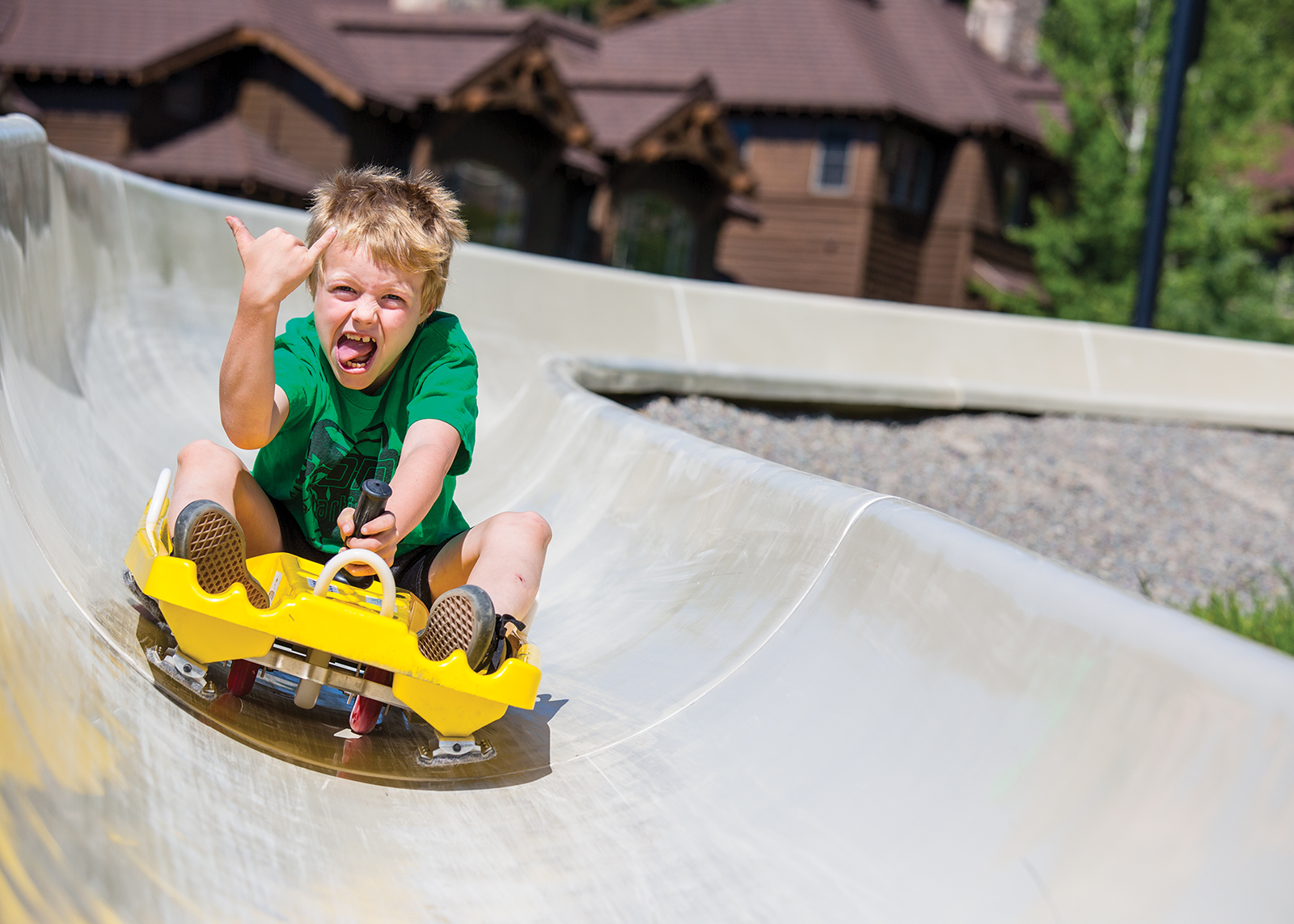 Back in the summer of ‘09, we premiered the first alpine slide in Montana. We called it, Alpine Slide.

Those were simpler times. Back then there was only one downhill mountain bike trail and no Aerial Adventure Park. We had a zip line tour with four zip lines (now there are six), so Alpine Slide really stood out as an activity. Sliders got a free chairlift ride up from the Base Lodge to the top of the slide, they could ride a sled down the 1,605-foot track to the bottom, hop on the lift and do it again.

During that first summer we saw just over 48,000 slide rides. Four years later, in 2013 we saw 60,000, and another four years later in 2017 we had a record 70,000. It gained this popularity in spite of the fact that by 2017 we had tripled the size of our mountain bike park, added the Aerial Adventure Park plus two more zip lines. All of that fun stuff to do and still, our beloved Alpine Slide was hands down the winner. Yet, so were the lines to ride Alpine Slide which impeded our ability to grow. We decided we needed two slides.

In the spring of 2019 we said goodbye to Alpine Slide and alpine sliding as we knew it. We dismantled our old friend, ordered many more sections of slide, and built two entirely new slide experiences. With two slides and two distinctly different rides, we would need new names for each slide and we landed on “Forest” and “Meadow.”

Unlike some side-by-side alpine slide experiences found in other states, these two slides are completely different experiences. Forest, as its name implies, heads into the nearby trees while Meadow descends down an open ski slope. Forest is the older of the two, having opened June 29, 2019. At a length of 1,724 feet it is a bit longer than its partner Meadow (1,587 feet) that made its debut on August 14, 2019.

Both slides are made of fiberglass pieces fit together, some are straight pieces but more form banked turns, curves and dips. We took countless hours surveying the areas to scope out both slides and create the maximum level of fun for each ride. The curves range from 15-degree to 160-degree turns and help accelerate the sled with g-force (gravity), and the dips offer the rider a sudden drop in elevation which also can encourage acceleration and a free-fall feeling.

Forest starts off with a slight dip followed by two low-angle turns and then a long straightaway over a trestle into the trees. Turns gradually get longer and riders pick up speed progressively while losing elevation down the slope. After a short section where it passes alongside Meadow’s track, Forest veers left into the Aerial Adventure Park area where it meanders under climbers, bridges and through a tunnel and eventually finishes on its mammoth 160-degree turn.

Meadow allows for acceleration right out of the gate with a steep (22-percent grade) 135-degree turn that jettisons the slider into light speed. The track winds its way down the Chipmunk ski run—although a green “beginner” run in the winter, has just the right vertical drop to keep the momentum going down the slide. Meadow has big turns and straightaways with dips including one “double-dip” feature guaranteed to make even the most serious rider giggle.

I asked our resident race car driver, who also happens to be our CFO, which slide he prefers. He likes both tracks, but prefers Meadow because it is faster. Although he does admit, he had a fast sled on Forest once and was impressed.

We have a fleet of 98 sleds that are sanitized after every ride, hung on the chairlift to be transported back uphill and then travel from the top of Chair 6 to the top of the slides on the “Pacline” which looks something like what you’d see at the drycleaners holding your clothes. Some of the sleds have been around since ’09 and many seem a bit more loosened-up and roll faster. With two new slides we also purchased new sleds and these seem a bit mellower. Either way, the driver has the ultimate control of the speed as they push the hand break down for speed and pull back to slow or stop.

I highly recommend you try both Forest and Meadow! I know this means buying at least two rides, but heck, even when we only had good ol’ Alpine Slide, one ride wasn’t enough! If you experienced our original Alpine Slide and thought it was a blast, you’ll be even more impressed now. We’ve recently rearranged our lines so that when you arrive at the top of the slides there are two lines going into the tent, one for Forest and one for Meadow. With two lines we hope to move riders through the lines efficiently. Please keep your distance—six feet behind the people in front of you in line—and then again on the slide. If you like to go fast tell the slide attendant, they will give you some space between you and the sled before you. If you prefer to go slow, that’s okay too! You have control of your speed. Either way, on either slide, enjoy the ride!